It's finally over!  Assignments are graded, grades are entered...the semester is finished!  It seems like only yesterday that I was preparing my first Elementary Russian lesson and thinking "what the heck am I doing?"  Actually, it was four months ago.  I never thought I'd make, I thought I'd be a horrible Russian teacher, and I thought I would bore them to death, but none of those things happened.

Last Friday was graduation and I had been asked to present the YFU students at the ceremony.  I was already planning on going, but this meant that I had to get up and actually speak.  Our speaker told a sort of emotional story, and I got a little choked up at the end of my speech when I tried to thank the current YFU coordinator for her ten years, but I kept it together.  It felt so chaotic, I had no clue what was going on!  But, I made it through!

Afterwards, I went out with some of the faculty and staff and had some food and a beer.  That was fun.  It was late when I got home, so I didn't get my grading done until Saturday afternoon, however, once I was done, I spent the rest rest of the weekend chillaxebrating!  I stayed up late, I slept in late, I watched Hoarders on NetFlix...life was good!

Now, I need to get organized so that next semester I'm not wondering what the heck I got myself into! 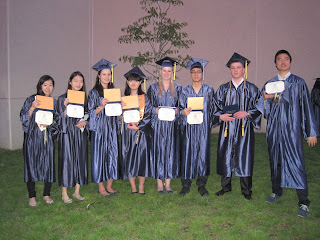 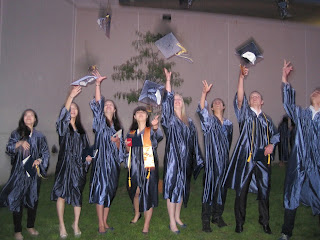