At work I try to do a theme day once a month to loosen things up and just have fun!  This past Wednesday was Puttin' on the Glitz.  Being so close to all the awards shows, I thought it would be fun to have a red carpet type shindig.  Well, we had one person dress up a little and come in, but I heard poeple talking about, so in my book it was a success.  Besides, who doesn't like to dress out of the ordinary at work sometimes? 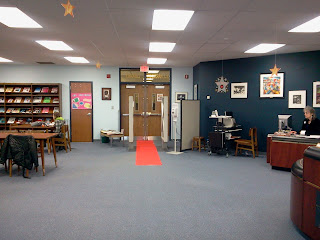 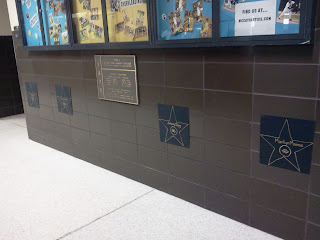 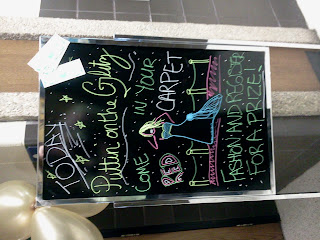 It's that time again . . .  that awful, dreaded, depressing day when everyone else is all cutesy and smoochy and lovey.  It's Valentines Day.
BLECH!
Now, I only say blech because I am not, nor have I ever been one of the people fortunate enough to have a valentine.  Don't get me wrong, I'm happy for all you people who have someone to suck face with and give ridiculously expensive gifts to, it just REALLY sucks having to watch something in which you cannot partake.  I am probably the most hopelessly romantic person in the world, and I would be doing the very same things of which I am being critical right now, given the opportunity, but as I already stated, being left out sucks!
Unfortunately, I cannot put all the blame for being left out on the opposite sex, as much as I would like to.  I could sit around and say guys are stupid, and things much worse than that, but a huge part of the problem is me.  I have always viewed myself as a kind of abnormality.  I've defined myself by the meanness others have shown me, completely discounted myself and the numerous excellent qualities which I do possess, and heaped loads of discouragement onto myself.  I guess you could say that I have always judged my own book by its cover, which I saw as undesirable and ugly (can you tell I work in a library?).  I've always thought "surely there is someone out there who can love me for who I am and then everything will be right with the world", but who am I kidding?  How can I expect other people to like me if I don't like me or find any value in myself.
Recently, I got a drunken pep talk from a very good friend.  I'm not sure if she remembers what she said, or truly meant it, but I am going to chose to think that she did mean it.  She said to me that I don't give myself enough credit (true, I don't give myself much, if any), that I'm beautiful (ok, I'm trying to believe that, but it's 180 degrees from what I've been telling myself), and that I'm really intelligent.  She looked at me and told me that if I could just believe in myself, and continue in my path to bettering myself I could be unstoppable.  Ok, I think that may have been the wine talking, nevertheless, it was something to see this woman who I adore and respect, tearfully long for me to give myself a chance.
There is a Ray Stevens song, recorded by Chet Atkins which I love.  I tend to identify with this song and long for all the other frogs of the world to get their chance.

Frog Kissing
Do you remember in the fairy tale
How the wicked witches spell changed the handsome prince to a toad?
Thru the power of her potion she handed him the notion
That he was lower than the dirt in the road.
And, thou she left him green and warted, her evil plan was thwarted
When there chanced to happen by a young miss,
Who in spite of his complexion offered her affection
And broke the wicked curse with her kiss.

Once upon a time ago
I was down and feelin low
Like a lonely frog in a pond.
Life was just a joke
And I was very near a crokin'
I was zapped by life's wicked wand.
Then in the depths of my depression
There came a true expression
From a love from a lady so sweet.
She gave warm fuzzy feelings,
Feelings that were healing
And knocked me of my little web feet.

There's a happy ever after land
Deep in the heart of man
Where a prince or princess abide.
But, all we get are glimpses
Of the handsome prince or princess
Cause there covered by a green warty hide.
And, though they're full of life's potential
There lackin one essential
To enable them to shine like a star.
And that's to have some guy or misses
Smother them with kisses
And love them while there just like they are.

And that's the secret of frog kissin'
And you can do it to
If you just listen.
Just slow down turn around bend down
And kiss you a frog

The point of the song is that there are lots of great people in the world who get overlooked because of their "warts".  Life's circumstances, and people's words/actions, act as the witch's potion, giving us "frogs" the notion that we're lower than the dirt in the road.  Now, while I definitely agree that everyone needs someone to love them as they are, we also need to do our best to be in a condition that is favorable for the affections of our prince or princess.
My next task is to look to one of my mentors, a  "caring nurturer, a member of several 12-step programs, but not a licensed therapist", Stuart Smalley.

I deserve good things. I am entitled to my share of happiness. I refuse to beat myself up. I am attractive person. I am fun to be with.  I'm going to do a terrific show today! And I'm gonna help people! Because I'm good enough, I'm smart enough, and, doggonit, people like me!

I need to remember Stuart's mantra, I AM good enough, I AM smart enough, and people DO like me!  Any beating myself up is just "stinking thinking."

Ok, Valentine's Day, your still a lonely, slightly sad day for me, but I won't completely hate you.  Love starts with me, so Happy Valentine's self!  You deserve a great day, but even more you deserve self-respect and goodwill.  You may not get a dozen roses, or a card, or anything at all, but that does not reflect on your value as a human being.  Someday it will be your turn!

So, Happy Valetine's Day to all you lovebirds out there.  Enjoy it, and remember how lucky you are.  (And try to be understanding and considerate of your single friends!) 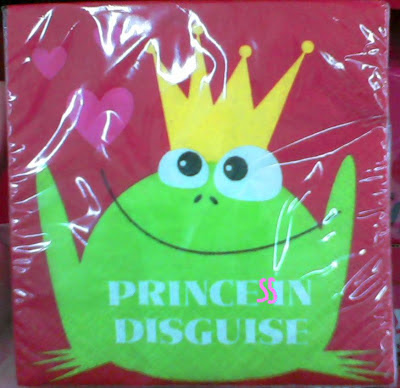 Had a little R&R with two awesome women!  It was some much needed rejuvenation!  Leaving home and heading out on the road is always so easy, but come Sunday when you have to come back home, it's not so fun.

Thanks L for being such a good hostess!  Hope to see you again soon!
at February 12, 2012 No comments: