Sticks and stones may break my bones, but words will never hurt me?

That is bullsh*t!  Words are the most powerful weapon in the universe.

As you may or may not be aware, October is National Anti-Bullying Month.  Here in my town we have jumped on the Not In Our Town bandwagon.  Many cities and towns have joined the movement after a tragedy, but we are the first to join proactively.  We have orange t-shirts that say Not In Our Town on the front and on the back they are personalized: Not In Our Schools, Not In Our College, Not On Our Watch, etc.  We have shown several films such as Finding Kind, Light in the Darkness, and we've had Rachel's Challenge presented to our schools and town.  We even made a float for the Homecoming and Oktemberfest parades.  (That's me in the center with the sunglasses.)

Bullying is something very personal to me.

It started as soon as I went to school.  I was the fat kid.  I can remember kids laughing at me as I walked past to get my mat to sit on the floor in kindergarten.  I lived right by the school, so I often rode my bike  on the playground and played on the equipment there, and I can remember riding down the sidewalk one day past some older boys, and a few in my grade and they starting insulting me and throwing water balloons at me.  Luckily, I was on my bike and managed to miss any missiles flying in my direction.  I did have a few friends in grade school, and the teasing wasn't so bad.

I think all children should be shipped off to labor camps during those years.  Middle school aged kids are ruthless!  This is the time in my life where I started to look down when I walked, avoiding eye contact.  I heard all kinds of hurtful words.  If you can imagine it, I was called it.  Tugboat, fatso, Titanic...

Eighth grade was the worst.

That's the year that my own friends turned on me and I had literally no one.  I was extremely depressed and contemplated suicide on a weekly basis.  That was the year I tried to starve myself.  It was also the the year I began having migraines and feeling nauseated all the time.  The school nurse rolled her eyes when she saw me coming.  I missed 22 days of school that year, yet no one wondered if there was some deeper issue.  I remember I even had my own cheer.  One boy named Chris used to chant for me "Katie K. is fat and gay," which is ironic since he was the one who was gay.

High school was no real improvement.  I had a group of friends who spent all their time stabbing each other in the back.  As much heartache as they caused me, at least I belonged somewhere--I had a table in the lunchroom which was almost the most important thing in life at that time.

I recently read somewhere that bullying is like crumpling up a piece of paper and then trying to smooth it out again--the person you bullied never quite recovers.  This is very true.  I'm 31 and still trying to undo the damage.

That anger has consumed me.

Still to this day, I walk with my eyes toward the ground.  When I look in a mirror, sometimes I burst into tears.  That is the power of words.  That is why we must each endeavor to choose our words and actions carefully.

I remember a 2004 episode of Without a Trace called Wannabe*.  At that time we watched the show every week, and as I sat there watching, I felt sad, and I also knew exactly what the boy was feeling.  A boy named Eric was bullied and felt like a loser.  At the end of the episode, he hanged himself.

The first time I watched it, I burst into tears and sobbed uncontrollably for probably twenty minutes.  That could have been me, I said.  Still today, I cannot watch that episode, or even a clip of it, without crying.  Even thinking about it is enough to bring tears to my eyes.

My wish is for no one to be bullied, teased, made fun of--whatever you want to call it.  I get upset when people make bullying out to be only against gays or certain groups.  Let's stop bullying of any kind!  Do we have to say "don't bully so and so," or can we just say "don't bully"?

Won't you join me in doing your part to prevent bullying?  Help make this world a better place so that another overweight little girl doesn't have to grow up ashamed of who she is, thinking that there is something wrong with her.

Email ThisBlogThis!Share to TwitterShare to FacebookShare to Pinterest
Labels: bullying, facing fears, our deepest fear, things that make me ill

Dad and I took a class at the Iowa River Gun Club range yesterday.  About a month ago we took a class to get our Permit to Carry, and the man who did that class said we do a class at the range to teach you how to fire.  Dad and I said sure!  (I mean it was only $15 bucks and all we had to do was bring eye and ear protection, and ourselves.)

It turned out that there were only four of us in the class.  Dad and I and a very nice couple.  The other lady and I both had pink safety glasses, which is a very important detail...


We shot another ten rounds...

Then we had fun!  Five rounds at a time, we had to load the magazine and fire off all five rounds in 20 seconds.

Afterwards, dad and I went snooping and he ended up buying a Mark III in stainless steel.  Needless to say, as soon as I am able, I'munna be buyin' my own and down at the range a LOT!

Email ThisBlogThis!Share to TwitterShare to FacebookShare to Pinterest
Labels: guns, i think i can, rocks my face off, things that make me ill


On September 30 I took two of my students and we went and picked apples and got some fresh, made while you wait apple cider.  Not sure what they thought of it, but mom and I sure had fun!

Hinegardner's Orchard has Cider Day during which you can come pick apples and for each bushel you pick, you get a ticket for a "free" gallon of cider.  Now, we did end up having to pay $1 for the jug, which was ok, I just wasn't prepared for that.  Still, it was a fun outdoorsy day, with a sweet reward! 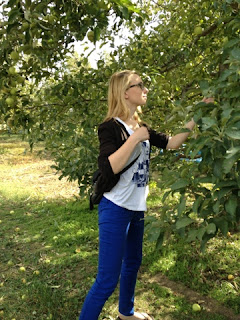 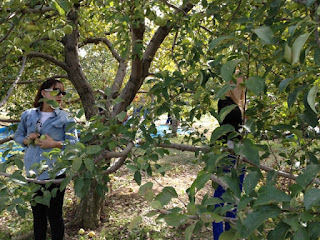 Hmm, maybe I should make some apple crisp...