By the end of my time there, he really wasn't a person anymore, more like a shell. I tried the tough love thing, I decided I was going to be strong and not give him any more money and I tried, I really did. But I was already so overwhelmed by the situation, one the likes of which I'd never been in before, and then he kept asking, begging me and it was more than I was prepared to deal with. And I have to admit, I was a little scared of what would happen when he started to detox.

Sunday came. I walked to Kate's and gave her back the jar that had held the delicious cherry compote her mother had given me and she and her husband gave me tea and helped me call a taxi for the morning. Then I walked to his mom's house and said good bye. I gave her my address and asked that if anything really bad happened to write me and tell me. She said that she would come by that evening and say good bye.

I went back to the house and gathered up everything I could. I got out what I needed for the next day. Then it was just time to wait.

Nina, his mom, came at some point and brought me gifts, bless her heart. We sat for a little and then she left. She brought me a bottle of champagne which he saw and when she left he came out and said "give me the champagne."

We sat there at the table and I said, "the taxi is coming at 3:30 tomorrow morning." He looked surprised and sad. He said "You could stay here." Realizing that we had an impossible situation, my heart sank a little. I said that I couldn't stay and he asked why. I responded that firstly, my visa was up, secondly, I had to work, and lastly, that I could not just sit here and watch him drink. I asked if he could understand that. Sadly, he shook his head yes and said "It's my problem."

I laid down about 8:30 to try and sleep. I set my alarm for 1 am to give myself plenty of time to get ready in the morning. I slept fairly well and my alarm had gone off once when the door to my room opened and the light went on. He came in asking me to give him more alcohol. I said that I didn't have anything to give him. He looked like what I am going to do and went to lay down. I sat in the kitchen for a few minutes and listened to him laying there mumbling things like "why", "God help me", "help me", "let me die", and so on. Then I showered and got ready.

By three he was finally quiet. At 3:20 I snuck out. It broke my heart to not be able to hug him or kiss him good bye, but by that point he was pretty dirty.

It was an emotional day of travel, and the day after I got back I got a nasty virus. So, emotional healing on this one has been slowed because I physically feel like crap.

So, as I am home feeling like crap, crying my eyes out, I am truly concerned that he might have died. Finally, on Friday I call him, but my mouth is so dry it's hard to talk, so we spoke only briefly. He said he was more or less ok and he was glad to hear that I got home ok. I said I would call in a few days when I was feeling better.

I called on the following Tuesday and it was a very strange conversation. He said he had been doing a lot of thinking and that he hadn't realized that there would be such a difference between Russian and American girls. I asked what he meant and he said that a Russian girl would have stopped him. This is the moment when I became pretty pissed off. I defended myself by saying that I didn't want to give him money but he just kept coming to me asking. He was then like "No, it'a not your fault." He said he was writing a letter to explain and as neither one of us had anything more to say we said good bye.

I was really mad. He was trying to blame me. It's obvious that he is not ready to except responsibility. I will be anxious to see what the letter says, but I think it's pretty much time to move on, no matter how much it crushed my shattered heart.

I guess it's time to wait and see.

Apparently, 20 bucks will buy you alcohol for 3-4 days.

The first two days I was there he kept hugging me and looking at me, saying, "I can't believe you are here." He would emerge from his room and come to the dining room to smoke, occasionally to eat something, and we would have brief conversations. He seemed genuinely happy that I was there, but of course this was not enough to make him stop drinking. After these brief encounters, he would go in his room, close the door and sleep.

By the third day I am finally catching on that this wasn't just excitement or nerves, that he has a real problem and that this is what it's going to be like. I ran through the gamut of emotions. Anger, sadness, pity, compassion, wanting to beat the shit out of him...

I don't remember if it was the second or third night after he had stumbled off to sleep and I sat there in the kitchen getting angry. I finally got up, went into his room looking for alcohol. I couldn't get the lights to turn on in my anger so I turned my phone flash light on and looked for a stash. He had to have some more somewhere, how else could be keep getting drunker as the day went on. He opened his eyes and looked at me and I said, "What, nothing more to drink?" Then I burst into tears, slammed his door shut and went into my room, sat on the bed and just bawled.

He came in looking confused and asked why I was crying. I asked why I wouldn't be crying. He got down on his knees put his head on my lap and said he was sorry, this was all his fault, please don't cry.

Of course, I couldn't stop crying for a long time.

And it obviously didn't stop him from drinking.

Monday I walked over and caught my host sister Kate on her way to work and she said to come back the next day and we could have a nice visit. Tuesday morning I went over and she was kind enough to take me around the city. It was a lovely day and we walked around and talked. She helped me get a SIM card for my phone and at last I could be in contact with my family and friends. She also took me to get some groceries because I was tired of eating bread and cheese, sausage and pelmeni. She dropped me off and said that I was invited to my host parents' house the day.

The next day I went to Kate's house and we drove to her parents. We had a lovely visit and a lovely lunch together. The house was so different, but it was so nice to be back.

When I got back to the house, I was getting bored by this point and now understood that my Prince Charming was not going to snap out of it, so I popped in my headphones, cleaned the kitchen (the dishes I had used and the all the cigarette ash off the table), made a snack, and popped a bottle of champagne. I felt pretty good. For a little while. Then I finally changed into my PJs and got my book.

Things all run together, but I believe it was later that evening I was in the kitchen reading and he came out to smoke. We talked for a minute and then he said "I must sleep." This time he paused and said "Maybe you want listen to some music?" I said, sure, so he put a cd in and then as the music began to play he got a little wound up. He started translating and explaining the music to me. Then he started dancing. Then he said I should dance too. So we danced, being silly for a minute. Then we sat back down and he explained songs a little more.

At some point he got up, came over and said he wanted to bite my ear, which he did. Then he asked me to get up and he put his arms around me and we danced for a little. He whispered in my ear that he really wanted to be with me, and then he went off to sleep. 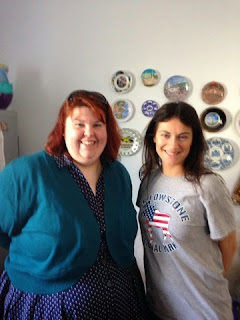 Pictures of Kate and I at my host family's house. 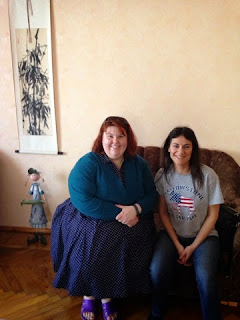 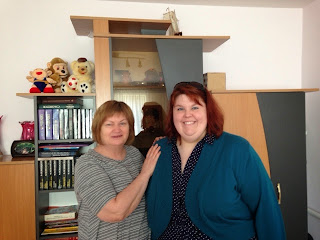 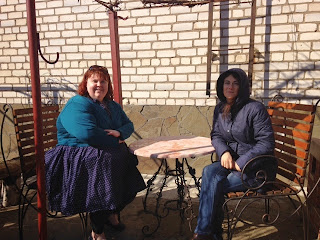 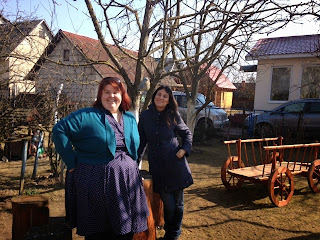 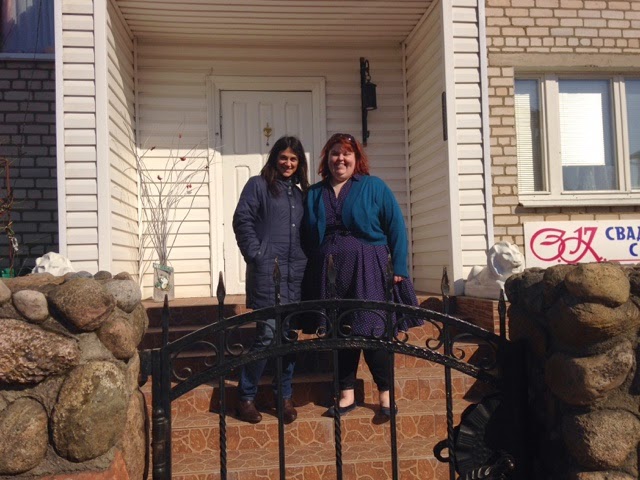 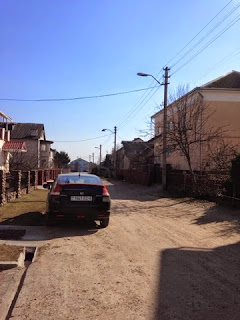 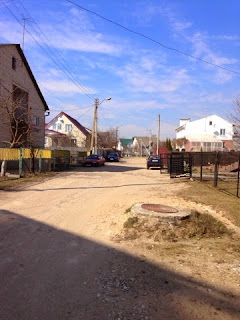