A Day of Firsts.

Well, what a day!  I walked 17 blocks from home to meet the Not In Our Town float to walk in the Oktemberfest parade.  I believe this was the first time I'd ever been in the Oktemberfest parade.  Then dad and I went to the General Store and looked at guns.  I held a couple Glocks, a Smith and Wesson, and a couple Rugers.  Then we stopped at a gas station near my house and I hot some hot chocolate to warm me up after walking in 56 degree, windy weather for two hours.  I had just been thinking last week how I'd never been in this particular gas station even though it's only a couple block from my house.

Then, after eating a couple tacos from Taco John's, we drove to Daryl's to snoop some more, and he offered to let us shoot a couple rounds downstairs in the indoor range.  I had never shot a gun before, and I have to admit I was nervous.  I almost said no when he asked, but I'm glad I didn't.  I shot five rounds from a Ruger .22, and 2 rounds from a 9mm.  I'm pretty pleased with the result.  Two in the black, but all on the target.  The lower hole on the black was my first shot from the 9mm.  If I was used to holding that weight in front of me, I think I would have done much better, but not bad for my first seven shots! 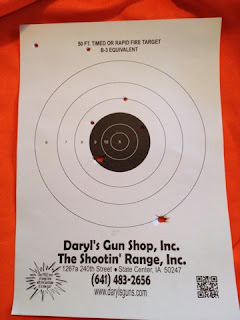 Then, after an already big day, mom and I drove down to the World Food Festival in Des Moines.  IT was interesting, but very crowded and I had little patience for it by that point.  The most notable foods we tried were Grilled Spam Musubi (below) and the Chicken Pelmeni. 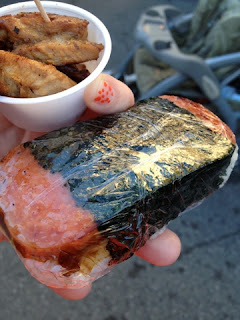 I want to shoot.

Email ThisBlogThis!Share to TwitterShare to FacebookShare to Pinterest
Labels: guns, i think i can, positivity, things that make me smile