Couldn't Get Any Worse...

A couple years ago I posted about how terrible our move went. I thought to myself, there is no way that any future move could ever be as terrible as this.

Man, was I wrong!

Things have been a lot harder than I expected since being laid off. I really thought that the stars were aligning, that I had found the perfect job and everything was in order. So, I didn't get that job, and this move has turned into a nightmare.

As I admitted last time, we are pretty much hoarders. We got rid of a lot last time, but we had a lot more to get rid of. We had a couple sales and got rid of some bigger furniture items, we donated several car loads of cookbooks (mom has a slight obsession...) and several loads of other things to Goodwill, but we didn't get rid of near enough.

And, we spent too much time goofing off, so when we had the truck, we weren't ready. We had some great family members who came and helped us load the truck and keep boxing stuff up, but in the end, we had to leave stuff.

A week later we drove back to finish.

Again, things did not go so well.

We ended up staying a day later than we planned, and we decided to stay in a hotel in a nearby town. The second night as we were leaving to go back to the hotel, we ran smack dab into a deer.

The thing was pretty much just standing in the middle of the highway. We managed to drive the rest of the way to the hotel, though we probably shouldn't have. The next morning, instead of getting a really early start, we spent half the day calling insurance and getting the car to the body shop. So, we are going to have to make another trip back.

I just almost can't face another drive back.

I'm not going to talk about how this is the worst move ever...maybe then the next one won't be so bad.

On top of all the drama, the semester is starting soon and I am really missing all the people I used to work with, and seeing all the emails and photos from my former co-workers makes me feel kind of blue.

Here's hoping that when we get everything wrapped up in the old house and don't have to drive back any more, I won't feel as blue. 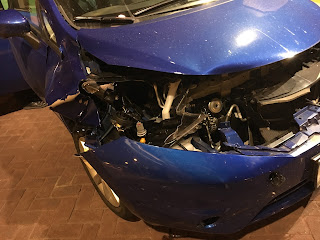