I am often saddened by the fact that I've never really had a grandfather. Oh, I have one living, but I don't think he's ever given two shakes about me. There was only ever one grandchild that he was interested in. My dad's dad--Robert--from what I hear, he would have been a great grandpa.

Unfortunately, I never knew him. OK, I knew him, but only as well as a toddler can know someone. He died when I was just short of turning three. My brother is three years older, and probably remembers more than I do, though we never talk about it.

I do have two memories of him. One is actually of his funeral--I didn't know what was going on and as we walked out behind the casket, I just kept following until my dad grabbed me. The other memory is really about him.

He retired from the factory and a few months later was diagnosed with cancer. I think it started as lung cancer and by the time they caught it it had spread everywhere, so by the time I could remember him, he was already very sick.

I remember the dining room at my grandparent's house plain as day. There was the dining room table in the middle (it was one of those 1940-50s models with the tubular metal legs and plastic seats, and fake plastic wood table) and two green chairs against the wall. There was a china hutch along the side wall. I remember that day that grandpa was sitting in the corner of the dining room in the 1970s green chair with a blanket over his lap. I probably knew the something was wrong, but I was incapable of understanding what.

My brother and I were crawling around on the floor in a circle around the table and every time we got to him, we would stop for him to pet us, because we were pretending to be little dogs. I remember him petting us on the head and saying "good dogs."

That's all I have of my grandpa.

Sometimes I feel gypped. I feel cheated--why didn't I get to have a grandpa who would actually love me? That's life. There are way more whys than not.

Even so, I'm glad that I have my one lonely memory. And I'm glad he loved me while he could. 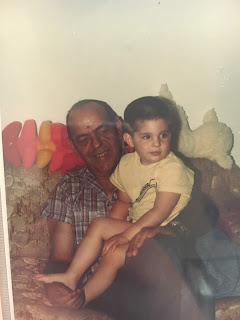 In your chair in the corner of the dining room
you sat,
a blanket on your lap.
I didn’t know what was wrong,
but I knew you were sick.
Your skin was so pale;
you sat very still.
Cancer.
Your eyes were dark and sunken,
still they watched me go ‘round
and ‘round;
your little dog.
Innocent child, on my hands and knees,
I stopped at your feet
each time I passed.
You patted my head,
“Good dog,” you said,
and I’d start all over again,
over and over again.
Metal table legs, dull brown carpet, and the legs of my family
were all I could see.


Grandfather and granddaughter—savor…
Once more around, for my treat.